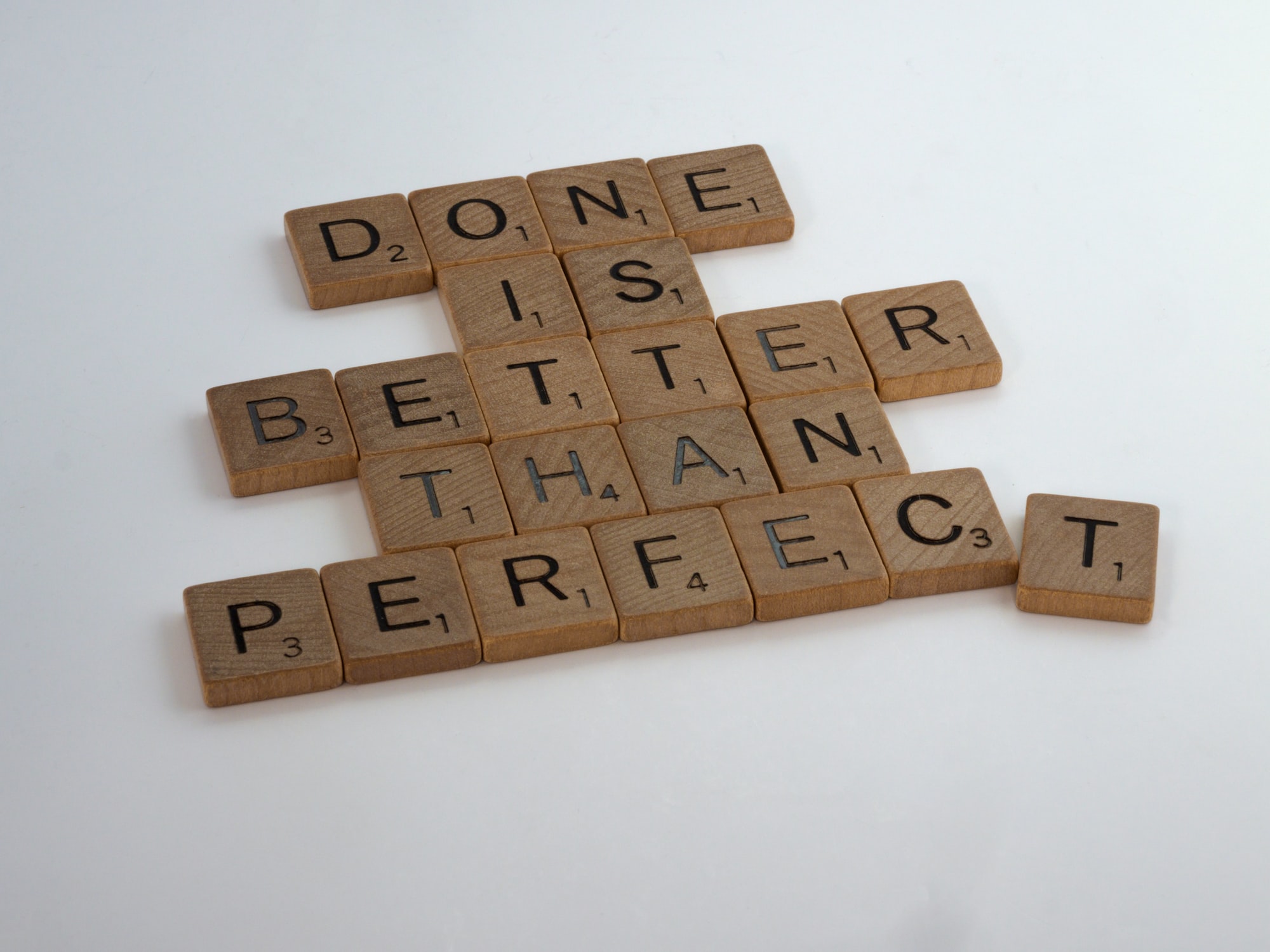 During college, I used to start the development of a web application and would never end up completing it because I was chasing perfection. But now I've realized that perfectionism is nothing but just trying to avoid coming out and showcasing your work to the public. But why? Well, insecurities. And not only it makes you feel bad about your work but also because of the fear of judgment you tend to take way more time to complete your blog, book, painting, web app, or whatever because you think that one tiny imperfection would be world-shattering. But in reality, even if you put in all your time you'll see people who can criticize your work.

Now, years later, I've realized that it is better to get things done rather than waiting to make them perfect. By getting things done, I don't mean that you put out junk. It's just that you should put deadlines for all the work that needs to be done, and when you showcase your work, be open for criticism. As soon as you get to know what are the issues, then prioritize them and iterate over and over again.

In Mark Zuckerberg's letter to potential investors he wrote:

"Hackers try to build the best services over the long term by quickly releasing and learning from smaller iterations rather than trying to get everything right all at once. To support this, we have built a testing framework that at any given time can try out thousands of versions of Facebook."

In other words "Build, Ship, Rectify, Repeat." It is very hard to even think about how potential audience or spectators are gonna perceive your work. Those imaginations are not only time consuming but can also be highly toxic as you are being consumed by all the negative criticisms that you think people might have your work but in reality, they might not even notice what is bugging you in your work.

“We suffer more often in imagination that in reality.” — Seneca

It's 2020, by now you must have seen an Apple Watch on so many wrists, but when the first-generation Apple Watch was released by a multi-billion dollar company called Apple which takes pride in hardware and software optimization that they provide in their iPhones, Macs, iPads and all the other products, it was abysmal. It was SLOW. It was a tiny computer on the wrist but you couldn't install any apps on it. It was being treated as a tiny monitor for the apps that were installed on your iPhone. It was not better than any other smartwatch available in the market.

In series 2 they improved the performance and let the apps be installed on the apple watch. In series 3 they improved the performance even further but now it was getting clearer that Apple is targeting Apple Watch not just as a great smartwatch for your iPhones but also focusing on making it your go-to health tracker. In series 4 they introduced ECG monitoring, in series 5 they came up with Always-on-display and fall detection, and this year in series 6, they've introduced blood oxygen monitor and sleep tracking.

Now, if you look at that progress then you'll realize that year over year improvement even if not significant but has made Apple Watch the "only" option that people should consider while buying a smartwatch when they own an iPhone even though there are hundreds of other options available.

That's what you have to do with your work and life. Place deadlines on everything and try to complete things and instead of waiting to make them perfect, iterate over and over again. If you have difficulty in starting then read how to take first step.

[Discussion Post] Done is better than perfect from r/StoicHuman

Think when you are practising, instead of when you've to pull the trigger

Do you feel stuck in life or is it moving extremely slowly, even though you want to do a lot of things. Well, I've figured out the issue and, let's get to the solution.

My perspective on "talent" has changed in last two years.

I became skeptical about anyone having any kind of a "talent". Now I have a firm perspective on this topic. Read it to change your life.

Stop caring about the outcome. Start to focus on the action at hand. You'll get rid of anxiety.

Caring about the outcome of the situation is a prison with bars made of anxiety. Escape it now.